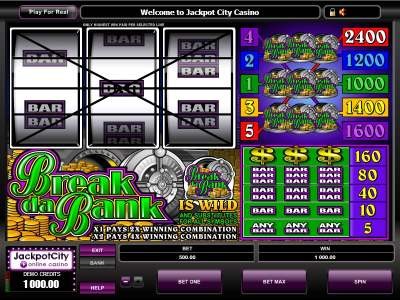 Speaking of the reels and the lines, the game has a simple setup of 3 spinning reels and 5 lines. The symbols appearing on these reels include the usual bar symbols that have a purple outlining. They also include dollar golden signs and the Break Da Bank logo. The logo of the game is a wild icon which means that it can substitute for any other symbol, apart from that, it can also double winnings for players.

Players can find out more about that as well as the line payouts that the other symbols pay at the paytable of the game that can be viewed at the right side of the screen of the slot game.