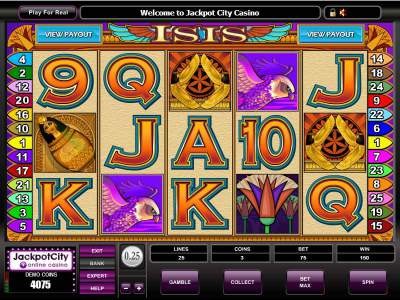 Isis is video slot by Microgaming, so players looking forward to try the game with real cash will have to head to Microgaming powered casinos such as Jackpot City and Gaming Club among other freeslots game casinos that are powered by Microgaming. The game has an ancient Egyptian theme. It is themed around Isis, one of the ancient gods of Egypt. The game will take players into the ancient times of the Pharaohs and their beliefs through the symbols and the design of the game. These symbols appear on the 5 reels of the game and the 25 lines that the game has to offer. These symbols include a flying bird, an ancient Egyptian eye, Egyptians symbols and Isis herself.

The game is also equipped with a set of special symbols and rewarding features to guarantee players a fun filled and a rewarding experience. These features include the free spins round as players can earn up to 30 free spins on the slot through the flying bird symbol. The game also offers a wild icon, which is Isis herself. She can use her magic to transform to any other symbol in order to create a winning combination for players