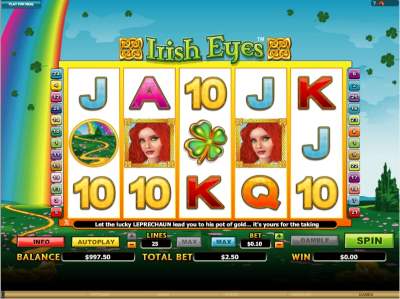 Irish Eyes is an Irish themed video slot that is powered by Microgaming, players can find this game at Microgaming casinos such as Jackpot City and Royal Vegas among others. The game has a terrific theme as it is themed around everything that is Irish, which explains the name of the game, Irish Eyes.

The game creates that theme through the design of the layout and the symbols that appear for players on the reels of the game. These symbols appear on 5 reels and the twenty lines that the game offers to its players. These symbols include a pot of gold, a rainbow, a road with a rainbow at the end, a red headed Irish beauty and more.

The green leprechaun is the wild symbol of the game that can use its Irish magic to replace any other symbol on any of the slot machine’s lines or reels. As for the scatter symbol, it is the red headed beauty, it gives players scattered rewards as well as activating the free spins bonus round where players can earn up to 12 free games.