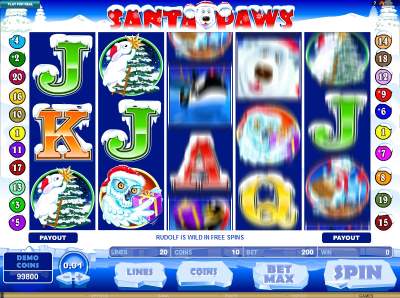 Santa Paws is an exciting Slots Games that will take online players on a trip to the North Pole where Santa lives so they can meet Santa’s helpers who live in the North Pole. The game presents players this wonderful gaming experience through 5 spinning but non progressive reels and a total of 20 lines. The entire game is themed around the North Pole as it is filled with snow and ice, even the control panel of the game that is found at the bottom where players will place wages, choose lines and spin the reels, they are made out of ice blocks floating on water. The symbols that appear on those reels include a bear, an owl, a Christmas tree, a penguin and a whale. There are also card symbols that come covered with snow to fit the game’s theme.

The game offers players a gamble feature but apart from this feature, the game has another rewarding bonus symbols and features. The game has a free spins round, which is triggered by the penguin where players can claim up to 12 free spins. The bear is the wild symbol that can substitute for other symbols on the reels.