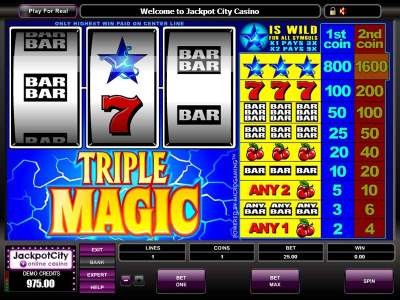 Triple Magic is a 3 reeled classical slot machine game from the classical gaming selection of one of the biggest names in the online gaming industry, Microgaming. The game provides players with the classical three-reeled slot machine experience that used to be enjoyed at land based pubs, bars and casinos.

The game’s three reels and one winning line can be found on the left side of the game’s screen. The symbols that appear on these reels are inspired by classical slots as they include cherries, sevens, one bar, two bar and three bar symbols. There is also the special symbol, the blue star symbol which can replace any other symbol as well as giving players multiplied rewards.

On the right hand side, players will see the paytable which contains the different payouts that players can earn through the slot machine as well as the wild symbol of the game. It also shows players their payout according to their bet, whether they bet 1 coin or 2 coins. Speaking of which, players will be able to place their bets by going through the different wagering options that can be found at the bottom of the reels.
[/box][box style=’blue rounded’ ]